Do You Want To Play Your Sounds & Samples

With Your MIDI CONTROLLER or PC KEYBOARD ?

Our Packs are intended for Ableton Live & Max For Live Users.

You don´t have Max For Live? No problem!

Our Packs can be played also only with Ableton Live.

WE ADDED AN EXTRA FOLDER:

For those who will purchase Live Packs from this site,

there will be available

who work also with ´´AUTOBEAT´´ Max For Live Device by K-Devices.

For more info about   ´´AUTOBEAT DEVICE ´´

(No Max For Live Required). In this set you get 10 MIDI Clips extra,

which were exported from Autobeat Device,

so that you don´t miss a possibility what first set offers you.

You can still use all Instrument, Drum and Effect Racks like in the first set.

1. From AUTOBEAT DEVICE (Use Our Presets to Trigger Samples from Racks)

3. From COMPUTER KEYBOARD (Switch the Keyboard in the Upper-Right Corner)

A Dumplin Drum also called a Hand Drum consists of a two cylindrical drumheads, on which are connected 2 small balls with the string. Usually is played with the bare hand rather than a stick or mallet.

Stirring Xylophone also named Bright Wood consists of 8 robust wooden sound plates (different lengths) made of Canadian spruce. By steadiliy turning the mallet around inside the instrument, a sparkling sound can be generated.

Koshi belongs to the group of Wind Chime Instruments, where eight chords are welded with silver into the metal plate at the base of the resonance tube which creates soft harmonious tunned sounds with many overtone frequencies from low and high frequency spectrum.

The Kalimba, also called a Thumb Piano, is an African musical instrument consisting of a wooden board, often fitted with a resonator on which are attached metal tines, played by holding the instrument in the hands and plucking the tines with the thumbs.

The xylophone is a wooden percussion instrument, which consists of 13 wooden bars struck by mallets. Each bar is tuned to a pitch of a musical scale (pentatonic or heptatonic). The sound of the Xylophone is a deep and warm and when played in lower octaves, the overtones can be clearly heard.

The Asalato also called Kashaka is a simple percussion West African instrument made of two small balls filled with beans, which are connected with the string. The final result is a percussion sound with a grainy side sound effects.

Crystal Bells are simple percussion instruments, shaped of a hollow cup most of the times. When they are strucked together, they create hi-pitched resonant tone which vibrates in a single tone.

The Flexatone is a hand percussion instrument consisting of a small flexible metal plate connected with 2 small balls in a wire. When we move the plate, balls struck on it and create metalic percussive sounds with windy side effects.

African Agogo Gong also known as African Hand Gong it´s a double bell instruments made from recycled metal by one Nigerian famous for his Gong-Making Expertise. Each Bell is forged by hand and wrapped with bamboo handle. This style of Double Bell is taken from Brazilian Agogo Bells. Agogo comes from the ´´lbo´´ word meaning ´´time´´.

Castanets also named ´´Idiophone´´ consists of a pair of concave shells joined by a string. They are held in hands and used to produce clicks for rhythmic patterns or rattling sound consisting of a rapid series of clicks. They are traditionally made of a hardwood (chestnut), although in last years the ´´fibreglass´´ is becoming increasingly popular as a material for Castanets. 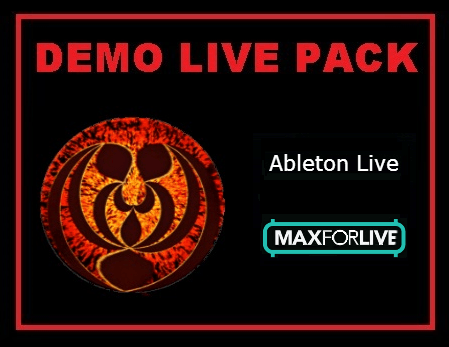 is a free Ableton Live Pack,

on which you can make practice and

include samples of 3 instruments:

which will offer you also updates

Presets and other files of Live Packs.